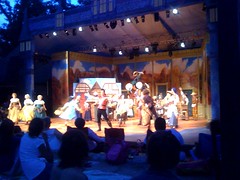 Beauty and the beast, originally uploaded by danceandgeek.

The above picture is from the Zilker Hillside Theatre production of Beauty and the Beast. We sat on a blanket and watched it.. very prop-heavy. But then it started raining, we sat in the rain for a while.. and I saw a dancer slip once.. then the second time he slipped and fell. He immediately got up again. I'm assuming he fell because the stage was wet.. and after intermission the show stopped. I enjoyed it... but Andy suffered. He felt it wasn't professional enough.

Wall-E: is probably the best movie I've seen recently. Very very good. Innovative story line. And I even enjoyed watching the credits and all the way to the end. It's so good I want to see this on the big screen again.  Even Andy liked it.

The fact that sardines is in the "Top 11 Best Foods You Aren't Eating".... brilliant!!

"Sardines: Dr. Bowden calls them “health food in a can.'’ They are high in omega-3’s, contain virtually no mercury and are loaded with calcium. They also contain iron, magnesium, phosphorus, potassium, zinc, copper and manganese as well as a full complement of B vitamins.
How to eat: Choose sardines packed in olive or sardine oil. Eat plain, mixed with salad, on toast, or mashed with dijon mustard and onions as a spread. "

Obviously he missed my recipe: heat it up with chili peppers, eat with rice and fried eggs.
YUM.

... said my voice teacher, Larry.
So I've taken multiple classes with him, and he has barely said anything nice about my singing. And I'm wondering maybe he just does this to pay bills and is disillusioned by his students.

But today, something important happened to me. I had just gone to the gym to swim, had dinner in a wonderful Gluten-Free restaurant called Wild Wood Cafe (really really good) and by the time I got to my singing class, I was just like.. meh. Worn out by the day already.

We went through his warm-ups, and Ponofka, and finally.. we got to some Musical Theatre songs. When we did Oliver's "As Long As He Needs me", he gave me a criticism he already has before: that I needed to breath through each note. Not just the first one. And I've also noticed that at points when I'm singing, I'm somehow boring myself (which is quite a talent on it's own).

So I nodded, and then we restarted, and I sang.. and in my head: "Whoa. What?? Where did that voice come from??" And then as I sang I actually felt the hair in the back of my arms raise... and wow.

I've never made my hair in the back of my arms raise (btw, the Indonesians has a word for that, makes telling stories faster) with my improv, or with my dancing. And I LOVE dancing.

Anyways.. after I finished that Oliver song, I looked at my teacher expectantly. There was silence... then he criticized how I was pronouncing the words.

Hrmpf. There was magic, I felt it. Surely he did? Maybe it's all in my head. Anyways, the bizarre feeling happened a few more times with Les Mis' On My Own and A drop of rain.

I was still contemplating this, even though my teacher hadn't said anything nice... when he said: "You're bad... in the right ways."
Was that a compliment? I looked at him, and was like... "What does that mean?"
Then he was like.. "You have great potential." (The first real praise he's given me.) "You have the right voice for what you're trying to do."
He says I'm a very strong and loud mezzo. And I could be good, but needs training (prob his ;-))
And that I could be a belter, and a classical Mezzo too. Apparently there isn't enough strong Mezzo's in opera.
And in musical theatre, according to him, a lot of the mezzos have tiny voices and want to be Sopranos. (Waitaminute that sounds like me ;-))
He said a lot of the women with my voice ends up in Country music. (??!!)

Anyways, that was a strange conversation.. and the first time after a lot of classes he's finally really praised me. So yay!
But more importantly.. I actually felt magic from singing.. for the first time in my life.
Collapse