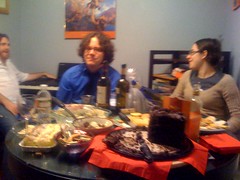 Well, I really enjoyed the party :) My roommate was very helpful and helped with some of the housework, and Igor and Peter brought in Rock Band.. and the guests brought good quality food and alcohol. I also got quite drunk, and it was all good.

I especially enjoyed catching up with people that I haven't for years... like Athena and Edwin. And also hanging out with some of the newer people in my social group. Andy did a delicious chicken... he actually spent like 5 hours making Rendang, which is an Indonesian beef dish. But the meat was too chewy, the brisket cut wouldn't soften. So he was just going to buy fried chicken to bring to the party. Instead, he had the brilliant idea of tearing the fried chicken to small bits and using the Rendang sauce.

My Tiramisu came out well, the cream part was quite perfect. I really liked it, but I think next time I'll use a different coffee mixture.

Peter brought a crazy chocolate cake that was spongy and delicious.

The party started at 8 pm and was roaring before 9 pm which was kinda odd. And then the guests cycled at around midnight for some improvisors that showed up.

Rock Band in my room was really loud and I thought I was going to get a noise violation, I think it helped that the people living upstairs were in the party.

I wore a delightful Nordstrom cocktail dress with Michael Kors silver shoes that I was quite pleased with, and for a reasonable price too.

I felt really buzzed and happy to be surrounded by my awesome friends :)