Yesterday, Andy and I celebrated our three year anniversary. :)
We went to Uchi! Yum yum. I haven't been for about 2 years now.. and it was amazing. Even Andy was making noises of pleasure, and saying how great the food is. And you all know that Andy isn't easily impressed.

We had the omakase, which is the chef's choice. It consisted of 10 courses for 2 people. It sounds like a lot, but the portions were tiny for most of the dishes.

Let me see if I can remember some of them.

We started off with an amuse bouche which was some sort of salty geloto thing. Unimpressed.

There was a yellow tail in a mango sauce.. which was my favorite. So delicious, the yellowtail was one of the best yellow tail I've had in a while.

There was a whole fried bass fish. That was the biggest portion.. so good.

Oyster dish, which I loved.

A sushi platter, which we added unagi saperately. They grill their unagi's instead of using a toaster oven. So good.

The only thing I didn't like was foie gras cake, with egg yolk paper. It was terrible. I think Tyson Cole was trying to be experimental or something.

But the rest of the experience was amazing. We had eiswine, and also a good Moscoto (Gagliarda la villa moscato 2005).

Uchi lives up to it's hype. 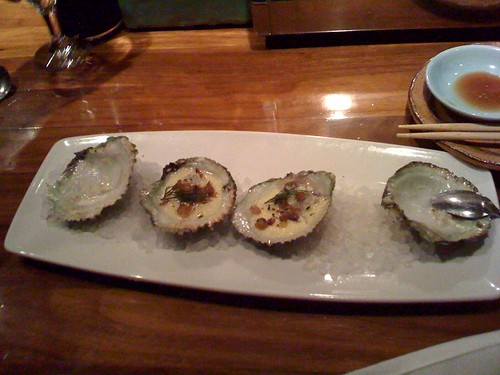