peteyfrogboy 's suggestion, I converted my starfish costume to a sheriff's badge. I sewed black felt letters across one side, and then added fluffy nibs to the pointy ends of the star.

When I showed up to the party, the people stared at me for a moment, until I turned to my profile, and Orlando yelled at me and was like: "You're a sheriff's badge!" And the whole crowd laughed. It was definitely a huger hit as a badge then it was as a starfish, probably because the rest of the crowd were mostly slick-looking, black-wearing mobsters and crimelords... and here I was, a bright yellow, dorky looking star. One of the guys liked it so much he begged to borrowed it, so I gave it to him and the costume went to Rain (a gay club) last night.

It was a fun party, I got to completely dork out on dancing (it was a ballet party), and Andy showed up for a bit with handcuffs... and it was fun!

Now to think on a halloween costume. 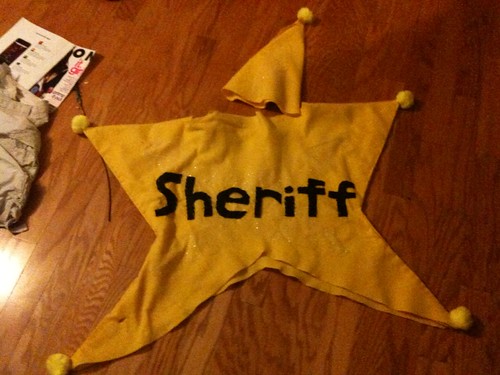