It's been a great weekend. Andy and I were invited to 3 Halloween parties, but we could only make one, because I'm old, and as an introvert have a quota on large crowds. I wish we had the energy to hit Michael's party though, cos we had limited improvisor party time.

I wore my felt iPhone... even though I was tempted to go with a sexy costume I bought... I suppose I should've made a "sexy iphone". But I figured, I'll just go with the dork factor. I've just recently discovered working with felt and it's fun! So I went as an iPhone to Maestro with Andy, where Asaf kept playing with my costume, and said he was really impressed. It was a funny kind of impressed... like he was surprised that he was impressed. I've gotten that reaction a couple of times with this costume, I guess I don't look like the kind of person that would make that kind of effort. To be honest, I don't think I am either, but all this exposure to Burners have upped my costuming urge.

And then afterwards we hit the Pink Palace party, where there was another iPhone! What?!
Except his concept was "There's an app for everything" so he wore a giant cardboard, which had a real camera attached to it, a calculator.. and the best was the "wine app" that had a faucet attached to one of those box wines, and actually gave out wine. Real funny. Mine is more adorable though. Hrmpf :) 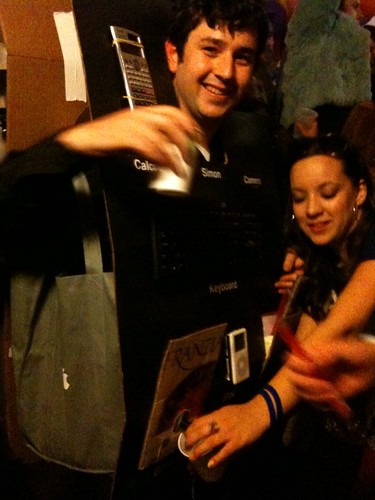 Then I met a guy who had a bunch of Gary Busey images with a velcro in the back, so I "downloaded" the app and attached it to a free app spot in my iPhone. It was pretty fun, it took people a second or 2 to figure out what I was... and then they burst out in a smile: "an iPhone!" and people poke on me, and I would ring or vibrate. Or try to tilt so that the screen become horizontal.

After years in the SCA where costuming was limited to a particular era, it's kinda nice to be able to be anything! Anything!

There was "blood" wrestling at the party too. Pretty hot. Then I got tired, and went to bed, Andy stayed a bit longer.

Sunday was calmer, we went to Chen's noodle house for brunch, they have knife-shaved noodles. 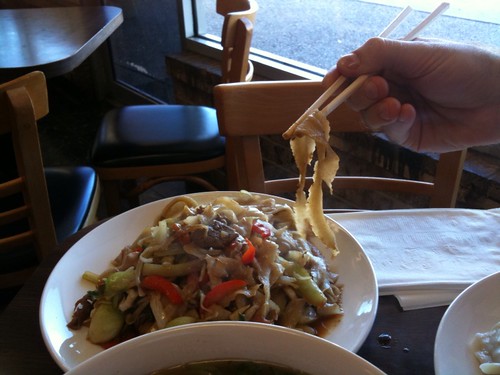 Then we saw Battlestar Galactica's "the plan". Then Andy had to go do improv, and then I chilled out at home to watch "Lost in Austen". Andy wanted to drag me to the haunted house "House of Torment" but I get easily scared so I refused. So he went alone, and was made fun of by other people there.
Collapse