Andy and I were supposed to go to separate thanksgiving today. Him with his bestfriend, and me over at Julian's house. But I came home from the gym, and he was in his pajamas, snacking and watching TV.
me: What are you doing??
him: Um.. the thanksgiving plans didn't happen.
me: Alright, you're coming to thanksgiving with me.
him: But... I am really enjoying doing nothing for thanksgiving. Can I just do nothing for Thanksgiving?

So he got dragged to the Julian Thanksgiving, which turned out to be quite fun and awesome. We played catch phrase, pictionary and agricola. Watched some football, and 2 of the hot guys in the party arm wrestled.

There was too much food as usual. I made Caprese salad, and also this crazy recipe from cook's illustrated: bittersweet chocolate roulade. It had marscapone filling and ganache icing, except that those two didn't set. And when I rolled the cake, and unrolled it, it broke. GAH. so annoying. Everything was delicious, so I put the "filling" and "icing" in bowls that people can add to the roll.

Afterwards I got to hang out with Orlando and Leslie whom I haven't seen in ages. Awesome day.

Here's the recipe. The next time I try it, less heavy cream so the liquids can set.
( Collapse ) 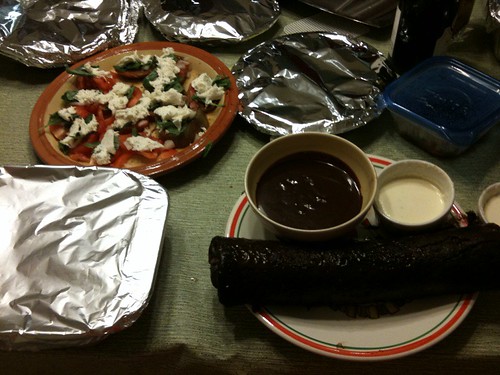