Oh man, I'm so glad that fast is over. I came in at $199 and change, and Andy was a bit over, $200 and change.
After midnight I immediately placed 2 purchase orders: one for a camera bag (a nice stylish one as opposed to the ugly one I have). It can carry a camera body, a giant lens, and flash!

And also a fanny pack! No really, it's a nice fanny pack. Useful for keeping hands free while shooting, and also for traveling.

Saturday was Halloween parties! I spent most of it in a chill and cozy cocktail party. And afterwards I stopped by a Jungle party which was crazy. It was too many people and I found myself getting anxious so I went home. I don't like too many people in enclosed places.
I did go to probably my first haunted house at work on Thursday, and that was so much fun. I kept screaming and I was scared at places.

So I cheated this year and upgraded last year's iPhone 3G costume to an IPhone 4. It had a front camera, and I "downloaded" Angry Birds. It's funny how many people recognized Angry Birds.

The Gary Busey app was also a big hit (received from a Pink Palace party last year). People were like: "Is that Gary Busey"? And I would reply: "There's an App for everything." Then I would make reception jokes about touching my right hip causes the bars to disappear. It was a lot of fun. People were sliding me, poking me.

People wanted photos of me, seriously. It was a great costume. I may have to recycle it in the future again. It was a lot of work to make, and I don't want it to just live in my closet! 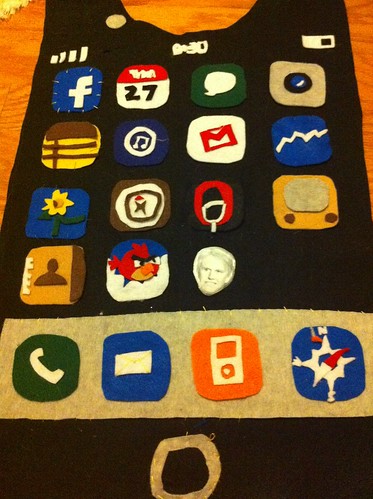 Sunday I did major cleaning, and then Andy and I went to the Drafthouse to see "The Walking Dead" premiere. Fun!
Collapse