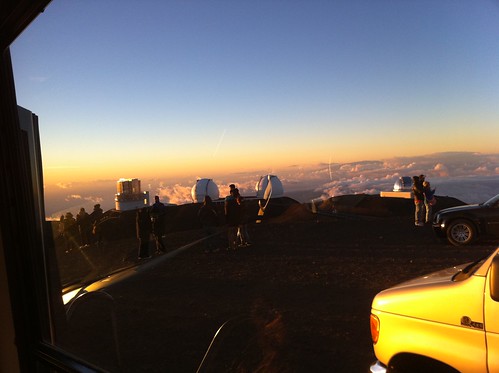 We are chilling out right now, at island lava java by kona beach, watching the ultraman championships happening (2.5xIronman). There are more people supporting this race then in the race (40).

Andy's sister woke us up at 6 am so they can go to the volcano national park. so we got dropped off at the coffeeshop since the free lodging from andy's parents expired today. Parents fly out today and we are sharing a room at Mauna Lani Bay tonight with his sister and fiancé. I wanted the four seasons but at 795 a night right now id rather buy an IPad.

Andy just went: "holy shit there is kahlua pork in your omelette".

I'm typing this on my iPhone.

So yesterday we had thanksgiving dinner at 11am. Very important to andy's mom. It was instant mashed potatoes, instant bread, etc + some fresh fish. It was actually kinda sweet.

After that, a bunch of us took a Mount Kea Summit and Stars tour which blew everyone's mind except me since we saw the same view at Maui's Haleakala crater. But the sunset was new and cool and we also did some star gazing which I guess did blow my mind. I saw Jupiter and 4 of its moons.

I did dump the tour's stargazing and had a lot more fun with the free public one. Since it was thanksgiving I mostly had 3 giant telescopes to myself. I don't recommend doing the paid tour.

The iPhone picture above is the summit of mount kea with several observatories at sunset.

The pics from my nikon d80 will hopefully blow your mind.