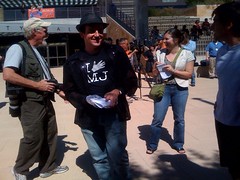 Hahahah. So the Thriller stuff was just a lot of fun. After one hour of class, where I still haven't gotten the moves down, we walked over to Austin Java. It was just Rocker and Danny, me and Nancy, and it was cool to listen to dance professionals talk about their life (Which seems hard in a lot of ways). Then afterwards, we walked over to the front of the City Council.

I had imagined us going to a small room inside the building, with one video camera shooting the Mayor, and us behind him. Instead, we were right outside the building in public view. There were video cameras from all over, I saw Fox, KXAN-nbc, News 8 Austin. And lots of photographers. We rehearsed a bit, then Drafthouse Henri got up and gave a little speech about World thriller day, and having Austin beat the record and being "the undead music capital of the world." Then the Mayor gave some spiel.. then we started dancing. We started on the ground, where we were all zombies.. then when we got to the fun part, the "roar", the Mayor jumped in and danced in front of us. And Mayor Wynn was actually GOOD! I was distracted and messed up. Of course. I'm resigned to the fact that any picture or video that goes up in the news will be just at the moment where I mess up. Ah well, they were trying to tell people that anyone can learn the Thriller dance anyways. The Daily Texan and the Statesmen took down our names. I shook hands with the Mayor. And then we walked back :)