Stuck in detroit for the next 7 hours 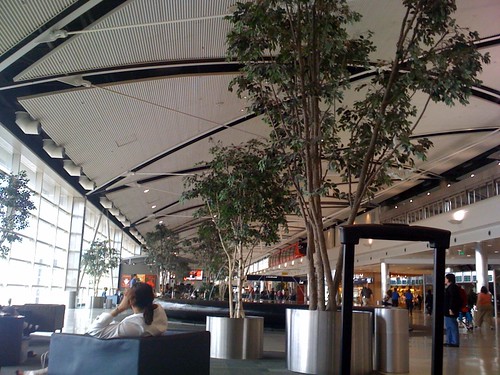 Stuck in detroit for the next 7 hours, originally uploaded by danceandgeek.

So I already had a crazy flight schedule today. 7 am to detroit then
houston then Austin. But the flight to Houston got delayed so I will
miss my next flight so they reschedule me on a direct flight to Austin
7 hours later. She gave me $15 food voucher after I asked for a
voucher. 10 mins after she did that, she asked for volunteers to take
the later flight. I came up to her and she wouldn't accept me as a
volunteer ($200 voucher) because she said it was only a later flight
for Houston and I wouldve missed my Austin flight then. Grrr. Bull on
that. Other people wouldve rerouted me and given me the voucher.

So now I'm stuck at Detroit for the next 7 hours.

To add insult to injury, andy has class till 10 pm so I would have to
wait in austin another 50 mins before he shows up.