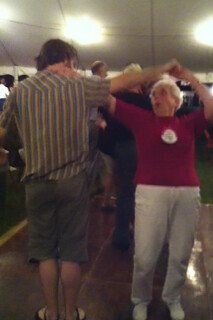 10 year reunion was awesome. Partly because Andy is with me, and that always makes things less awkward in a large group setting. There were babies but I think only 15 couples had babies... Out of 350 attendees from our class. Our class raised 750k in the last five years. I donated zero.

The class of 51 and 56 both gave around 25 million each and in all the reunion classes raised 80 million. The numbers blow my mind. Alumni giving must be a giant subset of funding for a university.

We had the Hungovers, an acapella group sing college songs and Andy said: this is the whitest shit I have ever seen. White people singing about white stuff.

And then I took him to Cornell night where there was even more singing of songs written in the late 1800s and I think he found it all very dorky and amusing.

There were three big tent parties each night. One with Latin music, one with rock, and the last one was pleasant oldies like "new york, new york" and Andy and I spent most of our time there - "the old people tent". We swing danced and it was so fun. I love lindy hop and really need to get back in that scene. Andy danced with a 70 year old woman in the picture above. He got super drunk on maker's mark and we were silly and affectionate with each other. Makes me happy, he has been so busy with improv and the new show he is directing. We ended with some poor man's pizza from the hot truck at our class tent.

Oh. Two class banners were stolen and the class officers got miffed and threatened to not serve beer if it wasn't returned.

Today, we started with Thai dim sum with cliff, manuel, dom and brandon. Afterwards we went to Watkins Glen, which is a series of waterfalls near Seneca lake. It was gorgeous! We got to stand behind the waterfall and I watched amber colors of water rushing down. The water was strong and aggressive because of the spring rains.

Andy hikes in his almost barefoot style leather thong sandals which gave him some grief in the wet hike. And my shoes and socks were soaked. We stuck out our heads on one of the smaller waterfalls and got our heads drenched. It felt icy and amazing.

The view was almost as gorgeous as Hawaii, except the water wasn't clear.
After a quick stop to Seneca lake, we had fish and chips and the best chocolate malt shake for dinner.

Then we swung by a bar and watched the Tony awards while I drank two glasses of Dr Frank's riesling.